I first heard of pianist Taylor Eigsti many years ago through a good friend of mine, Bud Spangler. Bud produced Taylor’s album Resonance in 2003 and could not get over the talent of this New York born, Bay Area bred artist. Taylor is a dynamic player and composer and has since been maturing into one of the finest pianists in jazz. We recently sat down with Taylor and asked him about his work and here’s what he had to say:

What was the first recording you purchased?
I think the first recording I would have purchased own my own may have been maybe an Art Tatum album in a record store. My parents, to my good fortune, really exposed me to a lot of great music when I was growing up so I got the chance to listen to so much music that they already had in their collection – Dave Brubeck, Earth Wind and Fire, Tony Bennett, Manhattan Transfer, Gene Harris, Oscar Peterson, David Benoit and lots of contemporary jazz, and so many other artists as well.

Who are main musical influences and why?
I would say I’ve had different, constantly changing heaviest musical influences as my life has changed over the years. Earlier on, I was most influenced by a lot of my hero pianists that I listed to growing up (Herbie Hancock, Geoffrey Keezer, Benny Green, Brad Mehldau, Kenny Kirkland, Michel Petrucciani, etc.), and while they all remain influences, over time my attention has been largely drawn to great players of other instruments – examining how some of my all-time favorite improvisors constructed their concept and trying to translate it to the piano while trying to find new intervallic vocabulary. I also have over the years mostly been listening to some great classical composers, and composers in genres outside of jazz music. Other artists/composers that I love and am highly influenced by include Wayne Shorter, Bjork, Clifford Brown, John Coltrane, Erykah Badu, Eric Harland, Kneebody, Digital Underground, The Doobie Brothers, Dvorak, Elvin Jones, The Police, The Eels, Imogen Heap, Sigur Ros, Stevie Wonder, Jason Moran, Yosvany Terry, Squarepusher, and so many more just to throw out a few.

To you, what is the essence of great jazz?
Great jazz to me is people playing honest music in the present moment. I think there’s been great examples of this all through time, and there will always be examples of it. The heart of what makes jazz music great is exactly what will sustain it through time. It’s about finding joy in interacting with other artistic voices while trying to create something that is intriguing and entertaining to listen to.
That is jazz at its best, no matter the style of it.

Name one jazz recording that every fan needs and why?
Nancy Wilson / Cannonball Adderley – as close to a perfect record as I can think of.

Tell us about your album Daylight at Midnight.
Daylight at Midnight is my seventh album. With this one, I wanted to take some songs that would serve as good vehicles to play that more closely represented the types of music that I listen to these days. I still listen to jazz standards, but for this album, I’ve tried to find some songs that have powerful melodies that are not necessarily associated with the American songbook that would still serve as great vehicles for exploring texturally and dynamically within a group. I was fortunate to work with producer Matt Pierson on this record, and he helped me choose a selection of songs by great songwriters that focused on strong melodies. I specifically wanted to try to pick tunes that would not be structured around just the ability to “blow” over them – I wanted to try to make the role of the piano more focused on expressing lyrical ideas and interacting with a voice, and have the soloing be imbedded within some less typical structures to some of the songs. I’ve particularly been drawn in recent years to the sound of the human voice, and the way one could use the piano to support, follow, and guide it. Many of the songs are covers by some very modern groups like Mutemath, Imogen Heap, Coldplay, etc. Some come out of the world of other singer-songwriters like Elliot Smith, Nike Drake, Feist, and some new originals that I wrote with one of my favorite singers and composers – Becca Stevens. The group on the album is Eric Harland on drums, Harish Raghavan on bass, and Becca on vocals, ukelele, and churango. Julian Lage also is on the record – we did a duet of Nick Drake’s “Pink Moon”. 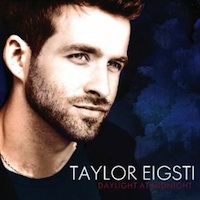 You are interpreting some excellent and not so common pop tunes, how did you select them and what were the challenges in putting a jazz spin on them?
The songs were a combination of some of my favorite pieces, and some great pieces that Matt Pierson turned me on to – it was a fun exploration through a lot of music during the process of figuring out which tunes. The challenge to me of putting a “jazz spin” on something is to be honest with your feelings towards that tune, and respectful of where the composer was at emotionally in writing that tune. To me, the concept of turning rock tunes into jazz ones by adding a swing beat has been effective in plenty of instances over time – but for me, I’m not looking for new ways to do that. I just want to play songs that are good songs as honestly as I can, and hopefully the emotions of the song will come through for the listener. So in doing arrangements of these tunes, many of them being “covers”, I tried to keep in mind the original intent and build the arrangement through a different perspective that would be fun to play in my group.

Becca Stevens is featured vocalist on the album. What do you enjoy about her artistry?
Becca is an incredible new voice in the music world. She has such a deliberate, genuine tone and virtuosic control over her pitch – also crazy inspiring compositionally. Her tunes are so good – her music is one of the few things on Earth that I could play over and over and it always sounds fresh. It’s a real privilege to play with her, and I love what she adds to the band as a whole. We play her compositions in the group as well.

Guitarist Julian Lage is guesting on the album. What impressed you about his playing on the recording?
He is incredibly versatile on his instrument in terms of the sound that he gets. He was on two tunes on this record, and to me, what he adds to them makes the whole record complete. He has always been an adaptable, forward-thinking musical mind, and comfortable with either lots or very little input texturally, in terms of the sound of guitar in an ensemble. Julian is always conscious of the larger sound – the sound of the group as a whole. I love playing with him in any context.

Your compositions featured on the album are refreshing. What is your approach to composing and who are a couple of composers that you would call influences or models?
My approach varies, and inspiration can come from a wide variety of sources. Sometimes I will simply stumble on a nice melody somehow that sounds and feels new, or at times I have a whole system of writing down a numeric code and assigning notes to different numbers and equations. I enjoy composing songs within a few minutes, and I find equal enjoyment out of taking years to write and build the structure of one tune. As much as I love to try to find brand new ways of building composition, the best lessons are found in the history of the music, as well as investing focus in what’s going on in the world of today’s best composers. I think there are all sorts of great models of composers throughout time – especially in classical music – those are great models for improvisation as well. But certainly some of my favorite composers include Ravel, Federico Mompou, Rachmaninoff, Duke Ellington, Cole Porter, Herbie Hancock, Maria Schneider, Wayne Shorter, Vince Mendoza Rebecca Martin, Ben Wendel, Geoffrey Keezer, and tons of others.

Can you share with us a couple of your favorite tracks from the album and why?
My personal favorite track is “Magnolia”, a song I wrote for Becca Stevens – she did the lyrics. I feel that one and maybe “Midnight After Noon” – another collaboration with Becca – really sum up the direction and vibe of the new music. Also, it was fun to play one of my favorite tunes by Mute Math – “Chaos” and let Eric Harland rip it to shreds.

Recommended:
Daylight At Midnight
Let It Come To You
Lucky To Be Me
Resonance