Miles Davis’ Doo-Bop came out in June 1992 and it was the first project marketed on the original Jazz Online bulletin board system. (I guess I’m dating myself.) Warner Bros. Jazz was our first official client and it was an honor to work the final studio recording by Miles Davis. Looking back to that time, Doo-Bop marked the beginning and end of a couple of things in jazz. First, it was an innovative fusion of contemporary jazz and hip-hop. Although this experimentation was going on by other artists at that time, Miles was a step ahead on how jazz and hip-hop could coexist and create its own funky vibe and credible direction (I am speaking of the specific tracks on which Miles collaborated). Of course, the jazz police denounced this album, as they do most anything that pushes jazz into popular music arenas. Personally, I loved it and still do to this day. The other thing Doo-Bop marked was the end of the Miles Davis era. Miles always pushed the boundaries of jazz and he got our attention whenever he ventured into new musical terrain. Think: Kind of Blue, Sketches of Spain or Bitches Brew, etc. This not only impacted jazz, but also music in general. Miles was genius at getting non-jazzers to dig his stuff and countless musicians spanning all genres happily sing the praises of his profound influence in their work and life. And although that influence may never diminish, Doo-Bop was his last recorded statement. 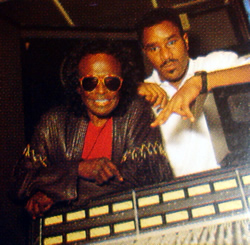 On this podcast episode, I sat down with Doo-Bop collaborator, Easy Mo Bee, and he shared his story of meeting Miles and the genesis of Doo-Bop. The interview was conducted at the very studio where Doo-Bop was recorded and coincidentally, I set up my recording equipment at the exact spot where Miles had recorded much of the album…sort of making Mo Bee a little un-Easy…. – JV