Doc Severinsen: A Legend, And A Friend

Anyone who was a serious trumpet student in the 1960s will tell you about the short list of trumpet “gods” in those days. Rafael Mendez and Clark Terry come to mind. Miles and Maynard, of course. And there was the classical virtuoso, Maurice Andre. But none of those legends appeared in our living rooms every night, as did the great Doc Severinsen.

From 1962 to 1992, Doc was prominently featured with Johnny Carson’s Tonight Show Band, and it was at the beginning of that era that I first became aware of him. Those of a certain age might also recall when Carson’s Tonight Show actually began 15 minutes early in some markets and only the band would perform until Johnny came out at half past the hour. It was during those segments that bandleader Skitch Henderson often featured his lead trumpeter, which would then cause my parents to wake me up (usually on a school night) with an enthusiastic “Mike, Doc’s playing a solo!” As a junior high school novice, my growing list of inspirational trumpet players now had a new name.

In the ’60s Doc Severinsen was also quite active in music education circles as a clinician and soloist with high school and college bands across the country. And it was in that context that I first heard him live. There were special concertos written just for him (and that only he could play), breathtaking renditions of popular repertoire like “The Carnival of Venice” and “The Bullfighter’s Song,” and tour de force solos with school jazz bands. To say Doc’s level of onstage virtuosity was phenomenal would be an understatement.

As I moved on from my school days (and the 1960s), other brilliant players, both jazz and classical, got my attention and fueled the muse. But I never forgot about Doc. And when I released my first solo record in 1982 (Blue Jay Sessions), I put a copy in the mail (addressed to Doc at “The Tonight Show, Burbank, CA” as a wild guess) and assumed it would end up in an NBC mailroom slush pile.

But in the summer of 1983, when I went to see Doc’s fusion group “Xebron” in concert, I wandered backstage after the show and had the opportunity to approach Doc’s dressing room, introduce myself and say hello. “Thanks for the record!” were Doc’s first words to this complete stranger. And we began to talk trumpet like two old friends.

In the years since, our paths have crossed several more times, and no matter the setting Doc has always revealed an approachable and unpretentious side that can cause you to temporarily forget who you’re talking to. “The consummate gentleman” was how I described him in the liner notes for From Then ‘Til Now, another solo record I made in 1992 that included an original of Doc’s (from his Xebron book) called “You Are There.” I mailed him a copy of that album too (again in care of The Tonight Show) never expecting to hear anything. But one day my phone rang and it was Doc, who had tracked me down with operator assistance. He was calling just to say thanks… and yes, to talk more trumpet.

All of which led up to a warm reunion in August of 2010 when, by a series of fluky circumstances, I found myself in a backup big band behind Doc in Clay Center, Kansas. The occasion was the 99th birthday celebration of Clay Center’s musical matriarch, Pauline Snodgrass, whose late husband Wayne was one of the school band teachers Doc had worked with in the 1960s. Doc, still fit, youthful and sounding strong at 83, had gladly agreed to come back and perform, and during the course of the day — there was a morning rehearsal and an afternoon concert — I was able to spend some more time with him (talking horns and mouthpieces). We’d not seen each other in over ten years, but Doc made me and everyone else around him feel like a next-door neighbor. The consummate gentleman, indeed.

And speaking of those long-ago years of the 1960s… In the spring of 1967 Doc played with the Ruskin High School concert and jazz bands not far from my family’s hometown of Lee’s Summit near Kansas City. Afterward my parents and brother Pat joined the long line of autograph seekers and, when my turn came, Dad was ready with the Polaroid camera. Forty-three years later I took along that photo — which includes a 12 year old Pat Metheny looking over the shoulder of a young Doc Severinsen — to share at the Clay Center gig. Doc, who is a longtime fan of Pat’s, could only smile, shake his head and agree, “You never know what will become of those kids who attend our concerts.” 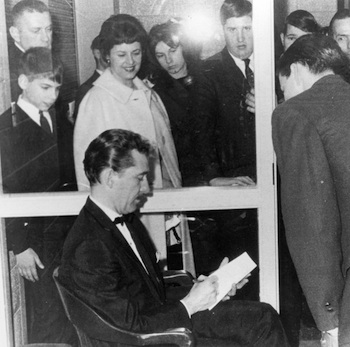