Legendary drummer Roy Haynes continues to blow people away when they hear his performance on the 1968 classic trio album by Chick Corea, Now He Sing Now He Sobs. Even after 40 years, Roy’s ride cymbal sound, as perfectly captured on the tracks “Steps/What Was” and “The Matrix,” is still the stuff worthy of lengthly discussions among drummers of all sorts, jazz and beyond. Who knew a ride cymbal could have such a life, legend and following? But Roy’s does. Where did that cymbal come from, where is it now and how did Chick Corea end up with it? Get the inside story on the cymbal and more on this special Jazz Online Jazz Backstage podcast with Mr. Snap Crackle himself, Roy Haynes. And this just in … don’t miss the special note from Chick Corea below the cymbal photo. It is not often we get both sides of the story from two jazz greats! – JV 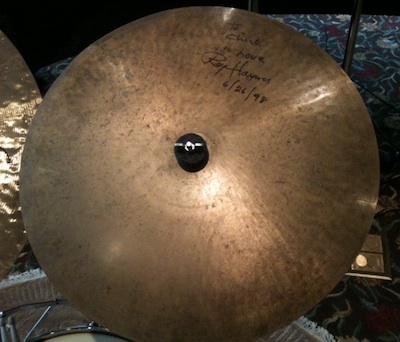 The famous cymbal.
(Special thanks to Chick’s manager Bill Rooney who took this photo)
A special note from Chick Corea:

I received this cymbal from Roy shortly after we did the Now He Sings Now He Sobs recording. By that time he had Paiste giving him lots of flat rides. But I took care of that one because of the deep significance that was attached to it regarding my friendship and music making with the great Royalty of Haynes. When I formed Circle with Dave Holland, we had Barry Altschul play that cymbal – it fit so well with the timbres of the piano. It can be heard on all the Circle recordings. Then when Airto joined the first version of Return To Forever, I had him play the cymbal. It can be heard on Return To Forever ECM, then on Light As A Feather. I had many of my drummers play the cymbal. It also appears on The New Trio – Jeff Ballard playing it. The legacy goes on – and the cymbal still embodies the Roy-alty that it came from.

Watch as Chick shares his love for Roy.