We first heard Daniel Karlsson and his trio featured on a Spotify playlist a few months back.  The track was “Salzburg” from the trio’s recording entitled 5 and we were immediately mesmerized.  We have since listened to all five albums recorded by the Swedish trio and have become enthusiastic fans of their music.  The leader Daniel Karlsson, who composes all of the music and is featured on piano and keyboards, is no rookie to the scene. He has been a prominent player for decades in the group Oddjob, a member in Magnus Oström’s band and has worked with Til Brönner, Nils Langren and many others.  We caught up with Daniel during a break from touring to learn more about him and his exciting trio.

(Jazz Online) What was your first recollection of jazz growing up?

(Daniel Karlsson) One particular memory that pops up is me listening to the Swedish national radio P2. There was a jazz concert with a hammond organ broadcasted. I remember the whining sound of the organ and the continuous hammering on the ride cymbal thinking that it all sounded awful. This must be the most boring music existing.

What was the first jazz recording you ever purchased?

I grew up in a small town, Kristinehamn, with only one existing record store called Duvan (the Dove). The jazz selection was far from comprehensive. Instead I got some cassettes from my music teachers with stuff like Yellowjackets to complete my parent’s collection of older jazz. I do remember though that I wished for Miles Davis’ Amandla for my 16th birthday and I got it!

One of our favorite jazz albums from Sweden is Jan Johansson’s Folkvisor – Jazz på Svenka.  Did that recording have an impact on you and your playing?

That’s probably the first jazz music I learned to appreciate. That record was among my parent’s vinyls. I listened to it a lot and finally started to do my own Jazz på Svenska. I recorded a double bass that I borrowed from school with a mic. Then I played my noisy bass recordings loud on my parents stereo while playing piano in addition and recording everything on another smaller cassette player with a small built in mic. It was a riot of noise! I wonder if those tapes are still somewhere in the house.

Who are your main influences on piano and keyboards?

Keith Jarrett.  One of my teachers living in the neighborhood stuck My Song into my hands one summer when I was 15. Luckily i was on a school leave because I didn’t sleep at all that night.

Sweden has produced many profound and talented jazz artists (ie: Lars Gullin, Bobo Stenson, Palle Danielsson, Anders Jormin, Ulf Wakenius, Esbjörn Svennson and others), how would you describe the Swedish approach and influence on the music?

The Swedish approach to jazz is probably springing from lack of jazz tradition. I guess that back in the days Swedish musicians did what they could to sound as American as possible, but they were always identified as Nordic in their tonal language, timing and harmonics. Most likely because of their own tradition of Swedish folk music and the fact that they where usually educated in classical music. Nowadays Swedish musicians in general have given up the aim to sound American. Instead we’re widening the conceptions.

How has working with Oddjob and Magnus Oström influenced your playing and composing?

My 20 years with Oddjob have taught me not to be scared of criticism and expectations. We’ve grown a confidence together which I can bring into my trio. Magnus has thought me that odd meters doesn’t necessarily sound odd and are not necessarily hard to play once you base them on riffs.

Can you tell us how you started your trio?

Actually, I got the final spark for really getting started at the memorial ceremony for Esbjörn Svensson. This was held at Rival in Stockholm. I never really followed the trio before Esbjörn’s tragic passing, and what they showed at the ceremony in terms of videos from their career was astonishing. Their commitment to their work and the music was really something else. And they managed with the impossible to reach out! I was really touched and of course emotional that sorrowful evening even though I didn’t really know him personally. However, a couple of nights later me and a friend spent one entire night in front of the screen intensively watching all the YouTube clips of E.S.T. (Esbjörn Svensson Trio) we could find. That was probably the start of my own trio. 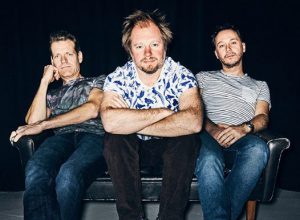 Tell us about your bandmates (bassist Christian Spering and drummer Fredrik Rundqvist).

Fredrik and I met 26 years ago when we became classmates on the jazz program at Skurup’s folk high school in southern Sweden. We learned to know Christian two years later when we both moved to Stockholm. We know each other very well and have spent a lot of time together touring in different constellations but also private with our families. They are both very patient with me and my ideas and truly committed to this project. They are contributing a lot with their sounds and ideas. Christian is an educated classical bassist and can sometimes appear to be unlimited in his skills.

One of the exciting and identifiable aspects of your trio is its sound and specifically your use of acoustic piano and electronic elements. How do you approach incorporating those sonic elements into the trio?

All the additional stuff, like keyboards and effects, are ideas that are coming once we listen to the recordings of the trio playing the songs. It’s always depending on what the clean trio sounds like. The concept is probably a fruit of my previous years with Oddjob and as a keyboard player and studio musician on various occasions. We’ve had the intentions to release a more acoustic album during the last 3 releases but it always ends up the other way around. Maybe this is a fetish I cannot control.

How has trio evolved since your first recording Dax Taxibåt.

We’ve matured in a way that brings more depth into our musical expression. The more happy straight forward heads from our first outings are nowadays mixed with tunes of more melancholic nature. A quote from a review of our second album Fusion for Fish was ”modern happy jazz.” By then I realized that all the songs where in major keys on that album. Despite that Fusion For Fish won the Swedish Grammy.  On our third album, At The Feel Free Falafel, we needed a new bass player since Kristian Lind moved to Turkey.  That of course brought other spices to our sound.

What is the best thing about playing jazz?

My instant thought is all the fantastic food we usually get invited for during tours.

Name one recording that cannot live without.

What is your favorite escape?

A long jog in a city I don’t know. I love getting lost for a while! I also love sailing in the Stockholm archipelago, but then I don’t appreciate getting lost the same way. Spending time with my kids totally on their conditions is always a big relief from my daily issues as a musician.

Listen to Daniel’s selected tracks from his trio’s recordings
via Spotify.