In February 1970, producer Creed Taylor launched the CTI Records label. He’d already spent several years in a production deal with A&M Records, producing a variety of jazz, jazz-pop and Brazilian-styled records, crafting significant hits for Wes Montgomery, George Benson, Antonio Carlos Jobim and others. Taylor had previously evidenced the hit-making touch for a variety of labels including Bethlehem and ABC-Paramount in the 1950s and Impulse! (which he founded) and Verve in the 1960s, nearly single-handedly launching the influential Bossa Nova craze in the early sixties. 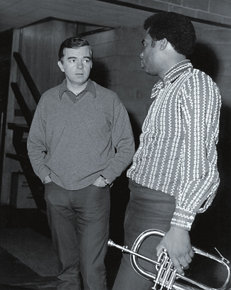 CTI Records was initiated with an extremely obscure record by folk singer/songwriter Kathy McCord (recently reissued on the British Big Beat label as New Jersey to Woodstock) and a Memphis-recorded album for flautist Hubert Laws (a recording originally intended for Stanley Turrentine – and also for A&M!). Several weeks later, Taylor issued Freddie Hubbard’s Red Clay and instantly recognized the direction he wanted his CTI Records label to take. The rest is history. When the music and the label, which became the famed (and infamous) home to the best jazz music of the 1970s, was faced with extinction in 1980, Creed Taylor signed a distribution deal that gave Columbia Records (Sony Music) control of the music.

Sony, owners of the American and European rights to the 1970-80 CTI catalog, has made several attempts during the last quarter century or so to bring the CTI catalog to the digital age. Why? This music represents some of the best and most significant jazz music made during the 1970s. Not only this, many of today’s jazz players grew up greatly influenced by this music. And, suffice to say, many hip hop artists have sampled many a CTI groove. Now, forty years later, Sony, through their Masterworks Jazz imprint, celebrates the CTI legacy with a series of the label’s most important releases.

Recently, six CDs from the CTI catalog have been issued (notably, for the most part, from the early part of the label’s massive discography) in beautifully-packaged cardboard, gatefold sleeves, reproducing the exact gatefold LP covers, with the original CTI logo and catalog numbers appearing on the CD precisely where they did on the LP. The music has all been mastered quite nicely by producer Richard Seidel using the original two-track analog tapes in Sony’s possession.

Freddie Hubbard’s Red Clay is the first great jazz record CTI ever made, featuring trumpeter Freddie Hubbard with a top-tier group spotlighting Joe Henderson (sax), Herbie Hancock (keyboards), Ron Carter (bass) and Lenny White (drums). Originally recorded and released in 1970, the original LP featured Hubbard’s now-standard title track, “Delphia,” “Suite Sioux” and “The Intrepid Fox.” The new CD reproduces the same program issued by Sony on CD in 2002: the original album tracks plus the bonus of the session’s “Cold Turkey” (which first appeared on the LP’s first CD release in 1987) and a live take of “Red Clay” from a July 1971 CTI All Stars performance in Los Angeles.

Sugar – Stanley Turrentine: One of the finest albums ever waxed by Creed Taylor is probably the finest piece of music the late, great saxophonist Stanley Turrentine ever laid down. Turrentine is featured to astute perfection on this 1970 recording with Freddie Hubbard (trumpet), George Benson (guitar), Lonnie Liston Smith (electric piano), Butch Cornell (organ), Ron Carter (bass), Billy Kaye (drums) and Richard “Pablo” Landrum (conga) on a tremendous blowing program that includes the classic title track (one of Turrentine’s two career theme songs), Butch Cornell’s “Sunshine Alley” and a riveting 15-and-a-half minute cover of John Coltrane’s “Impressions.” The new CD includes the original three-track program as well as the July 1971 live take of “Sugar,” featured on the 2002 Sony CD, and, thankfully, restores the fantastic Sugar sessions take of Freddie Hubbard’s “Gibraltar” that was heard on the 1987 CBS Associated CD but was inexplicably left off of the 2002 Sony release. This one is very highly recommended.

She Was Too Good To Me – Chet Baker: Baker hadn’t recorded in quite a while by the time jazz-star starved Creed Taylor invited the troubled trumpeter to record the incredibly lovely She Was Too Good To Me for the CTI label in 1974. Fronting a small-group featuring Bob James (on electric piano, taking several excellent solos here), Ron Carter (bass) and either Steve Gadd or Jack DeJohnette on drums, Baker sounds pretty much on top of his game here. You’d never know he’d sunk as low as he’d been at the time. It doesn’t hurt that he’s paired ideally with Paul Desmond on several numbers (“Autumn Leaves,” “Tangerine”), flautist Hubert Laws (Hank Mobley’s terrific “Funk In Deep Freeze”) and Don Sebesky’s occasional and pitch-perfectly subtle arrangements for strings and percussion. Baker provides vocals for the superb “She Was Too Good To Me,” “With A Song In My Heart,” “What’ll I Do” and the bonus track, “My Future Just Passed.” The new CD represents the first time this music has been issued since its first CD appearance in 1987 and reproduces the LP’s original seven tracks and the bonus track (“My Future Just Passed”), which also appeared on the 1987 CD.

Morning Star – Hubert Laws: Recorded in late 1972 between Hubert Laws’ well-known CTI classic The Rite of Spring and the 1973 CTI performance recording Carnegie Hall, Morning Star may be one of the least known of flautist Hubert Laws’ recordings – and among his very best. It’s hard to imagine a more perfect setting for the flautist, surrounded as he is by Bob James (electric piano), Ron Carter (bass), Billy Cobham (drums) and Don Sebesky’s sumptuously employed arrangements for horns and strings. Laws alternates between several flutes (flute, alto flute, bass flute, piccolo and an uncredited electric flute) and shares solo duties with Bob James, who is simply magnificent here. Sebesky’s suberbly lovely work here ranks among some of the very best he ever did for CTI. Laws covers a typical program of third-stream jazz (Rodgers Grant’s title track), spirituals (“Amazing Grace”), pop covers (Roberta Flack & Donny Hathaway’s hit “Where Is The Love,” co-written by this album’s percussionist, Ralph MacDonald) and interesting originals (“Let Her Go,” “No More” and “What Do You Think of This World Now?”). Surprisingly, Morning Star has never been issued on CD before, making this particular release substantially significant due to its very first appearance of availability in nearly four decades. Plus, it makes for excellent listening as well.

God Bless The Child – Kenny Burrell: Guitarist Kenny Burrell was Creed Taylor’s first-call guitarist on any number of Verve dates back in the early 1960s. Taylor also produced Burrell’s Verve records Blue Bash! (1963 – with Jimmy Smith), the classic Guitar Forms (1964 – arranged and conducted by Gil Evans) and A Generation Ago Today (1966 – also known as For Charlie And Bennie). Burrell hadn’t worked for Taylor for some years by the time of this May 1971 recording, the guitarist’s only appearance on the CTI label, and good as it is, doesn’t often sound like a typical CTI record. Burrell is teamed with either Richard Wyands or Hugh Lawson (“Love is the Answer” only) on particularly subdued keyboards, Ron Carter on bass, Billy Cobham on drums, Ray Barretto or Airto (on ”Love is the Answer” only) on percussion and Don Sebesky’s typically restrained yet more actively-fronted arrangements (Sebesky had previously arranged Burrell’s Blues – The Common Ground and Night Song albums). The program alternates Burrell originals (“Be Yourself,” the excellent “Love is the Answer” and “Do What You Gotta Do”) with such jazz standards as “A Child Is Born” and “God Bless The Child” as well as the CD’s bonus tracks, the solo takes of both “Ballad of the Sad Young Men” and “Lost In The Stars.” Freddie Hubbard (who solos) and Hubert Laws are featured on “Do What You Gotta Do.” The new CD reproduces all five of the LP’s original tracks plus the three bonus tracks featured on the 2002 CD release (which also featured the “new digital remix” of the two bonus tracks from the 1987 CD release).

Stone Flower – Antonio Carlos Jobim: Creed Taylor had a special relationship with the great composer/pianist/guitarist Antonio Carlos Jobim (aka Tom Jobim), dating back to the Bossa Nova classics Creed Taylor helped turned into worldwide hits in the early 1960s. Creed Taylor recorded the brilliant Brazilian composer’s first American album, Antonio Carlos Jobim, The Composer of Desafinado, Plays (Verve, 1963) as well as one his very best records, the beatifically beautiful Wave (A&M/CTI, 1967). The terrific Stone Flower was recorded around the same time as Jobim’s 1970 album Tide, one of the last albums Creed Taylor produced for A&M Records. Like Tide, Stone Flower was arranged and conducted by fellow Brazilian Eumir Deodato in the superbly wondrous manner of Claus Ogerman, who paired the composer’s piano, guitar or vocal with a sole trombone (almost always Urbie Green), a flute section and/or a small string section. Here, Jobim is heard with the always perfectly adept Ron Carter (bass), Joao Palma (drums) and the percussion of Airto Moriera and Everaldo Ferreira. Joe Farrell takes a soprano sax solo on the mesmerizing “God and the Devil in the Land of the Sun,” Hubert Laws solos on flute for “Amparo” and Harry Lookofsky takes a violin solo on the magnificent “Stone Flower.” A number of the tunes heard here come from Jobim’s score to the 1970 film The Adventurers. These include “Children’s Games” (aka “Double Rainbow”), “Amparo” (aka “Olha Maria”) and “God and the Devil in the Land of the Sun” (aka “Bitter Victory”). Still, the jewel of this collection is the remarkable “Stone Flower” (aka “Quebra Pedra”), one of Jobim’s finest jazz structures and something that’s been covered by a surprising plethora of appreciative interpreters from Santana and Herbie Hancock to Fats Theus on a little-known CTI album, Black Out, recorded several months later. Also here is the lovely “Tereza My Love,” “Choro” (aka “Garoto”), “Andorinha,” “Sabia” and the questionable cover of the well-known “Brazil.” Surprisingly, Antonio Carlos Jobim never worked with Creed Taylor again after this. The new CD reproduces all nine tracks from the original LP plus the bonus alternate take of “Brazil” (which, surprisingly, appears on the upcoming box set CTI Records: The Cool Revolution ) that appeared on the 2002 and 1990 CD releases.